Categories Brands
From A to Z
Home > Mongoose 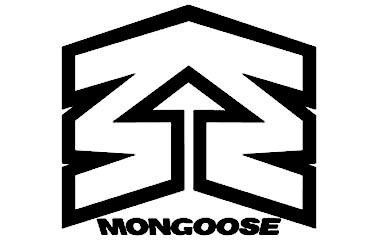 MONGOOSE. In the dirt, on the trails, off the ramps.

Mongoose is a brand name of performance bicycles since 1974. For almost 40 years, founded in a Southern California garage, Mongoose has always been an aggressive brand with products that push the limits of what a rider can do. From the biggest hits on the mountain or in the park to the urban jungle, Mongoose is an authentic brand that produces durable products built for real riders.

From the first products – to the current crop of BMX, Mountain and pavement bikes, Mongoose is synonymous with bikes that perform on the smoothest single track to the biggest drops and riders looking for trails that never end and keep the party going.

Mongoose company builds for riders. It's why their BMX designers aren't wasting time watching reruns on ESPN2 - they're out testing our new designs. It's what drives them to cook things up like Mongoose Front Porch head tube, which lets you fine-tune the handling on Black Diamond series mountain bikes, or Freedrive suspension technology, which eliminates pedal bob and gives you super-efficient full suspension. Experience that ultimately leads to better bikes for you.

These bicycles, which comprise specific models for BMX, mountain and urban biking, are offered with better-made frames and higher-level components. The BMX and mountain bike frames, for example, are constructed from high-end, triple-butted aluminum or steel, with some models built specifically for competition, a factor which further separates these superior Mongoose bikes from those found in department stores.

In a review of Mongoose’s Tyax MTB hardtail mountain bike BikeRadar.com found the bicycle to perform well in aggressive trail riding during ascents and descents, much of this owing to the model's intended design, front shock geometry and high-level groupset.

Some are necessary for the functioning of the website, others we use for statistical evaluation, for marketing purposes, eventually cookies may be set by third party providers. Consent to the use of other cookies than necessary for the functioning of the website, is voluntary. Click the button „I agree!“ all cookies are activated. Your choice of optional categories of cookies you can change it at any time in Edit settings. You can find more information in our Privacy Notice.